Demise of the Bull?

The NASDAQ is down more than ten percent from it’s all-time high set on September 3rd. This may be a harbinger of more decline to come, but both the strategic supply and demand indicator TATY, and the tactical supply and demand indicator Cv ROLLINS, are suggesting a budding buy signal may be forming in spite of the historic negative seasonal trend of September-October. We will act upon any new tactical buy signal in anticipation of an assault on new all-time highs. That assault may fail below new all-time highs, or aided by short covering may power on to new all-time highs, extreme bullish sentiment and valuations be damned. In either case, and depending on the final low for this decline, the potential risk/reward appears favorable, should a buy signal be issued.

The recent announcement by Apple and Tesla that they were going to split their stock was followed by a climatic like stampede into stocks led by the tech heavy NASDAQ. The S&P-500 and NASDAQ literally went parabolic into the September 3rd all-time highs for both indexes. This happened in an environment of extreme bullish sentiment, and sky high valuations, aided and abetted by a Fed that signaled that it would support the markets come what may. And, some of us are suspicious that the Fed, acting through surrogates, may have been supporting the bid under the market, when periods of weakness appeared to be developing, especially during the last hour or so of trading. Then came September 3rd and the tone, and behavior, of the market began to change swiftly, leading to the Friday close on the sad anniversary of 9-11 with the NASDAQ more than ten percent below its new all-time high.

So, has the bull finally met his demise, or is this just a budding buying opportunity in disguise? For a potential answer to this important question let us take a look at what the markets are saying about themselves through the metrics they are creating about their health. This is similar to your annual checkup with your doctor, which begins with a review of the metrics being generated by various systems in your body, and captured through medical testing, and then compared to those of a medically “normal” population. Some of the metrics currently being created by the stock market are shown graphically above in the attached exhibits, and explained below. 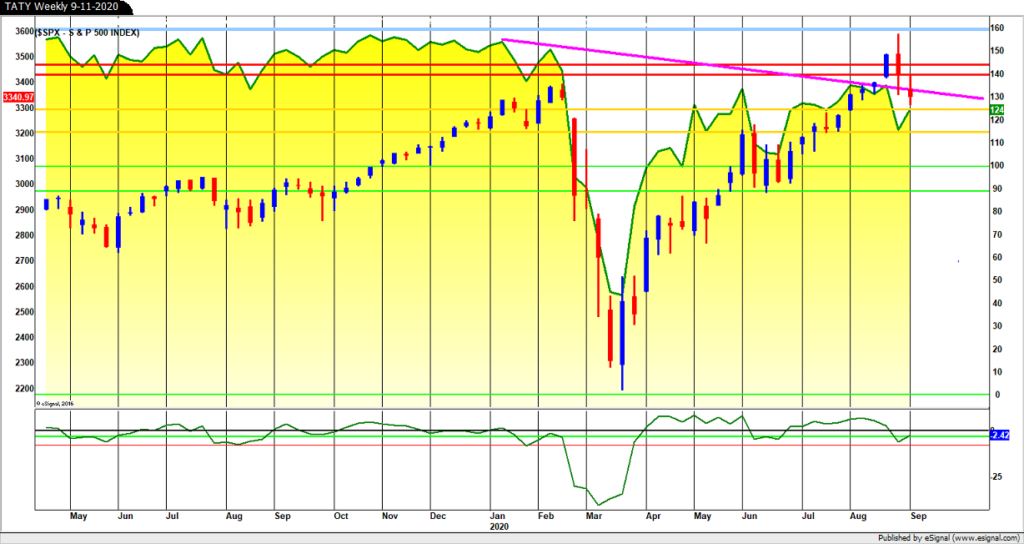 TATY is shown above in yellow with the S&P-500 overlaid in red and blue candle chart format. TATY continues to show a large negative divergence to the price, and finished the week again below the red zone with a reading of 124. The negative divergence is shown on the chart by the down sloping magenta bold line. However, the price continued to decline this past week, but as sharp eyed investors can see TATY actually finished above its closing reading of last week, a small positive divergence to the price, which closed almost on it’s low for the week. Please note that TATY is shown in a weekly format in order to monitor the strategic big picture. 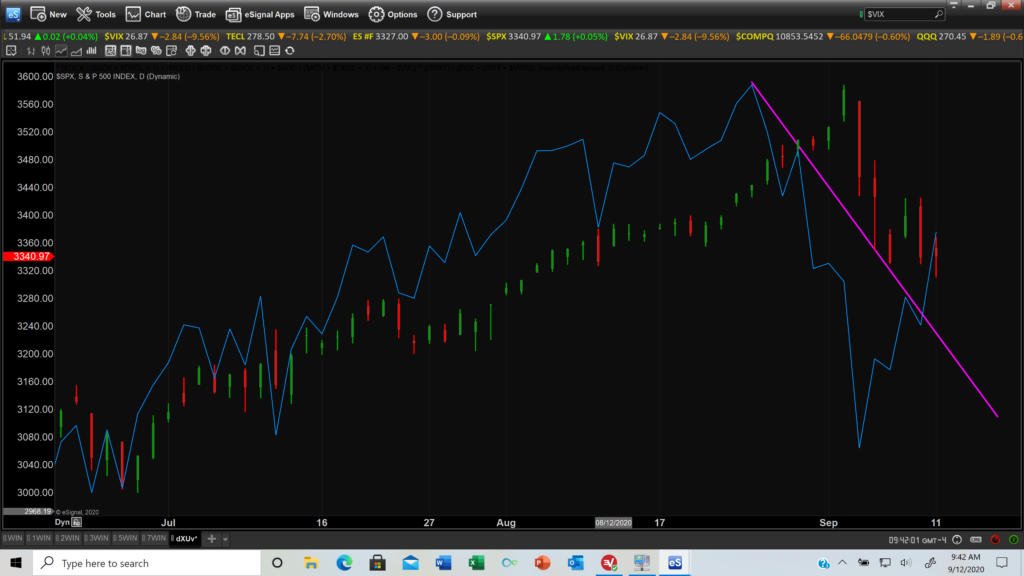 SAMMY is shown above in daily (blue) line chart format with the S&P-500 overlaid in red and green candle chart format. Investors will notice that SAMMY was painting out a dramatic negative divergence with the price as the stampeding “herd” could not get enough of the handful of big cap tech stocks, as those stocks were going parabolic in price. These kinds of situations rarely end well, and even if the broader indexes manage another assault on new all-time highs, the concentrated cohort of those which went parabolic may not participate to the same extent as previously. 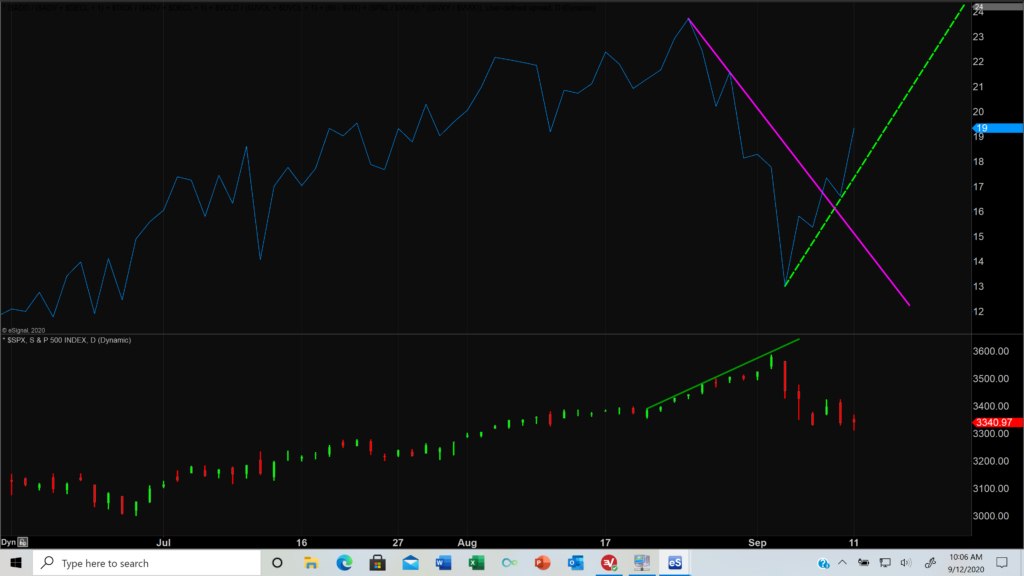 Please take another look at the SAMMY chart and you will notice something, which may be developing on the contrary to the negative divergence at the September 3rd all-time high. SAMMY was rallying at the end of the week as the price was still slowly struggling to go lower. This is even more apparent in Snapshot-150 (above) and 151 (below) of Cv ROLLINS in daily (blue) line format (Screenshot-150), and candle chart (Screenshot-151) format compared to the S&P-500 in daily candle chart format. The indicator is shown in the top panel in both Screenshots. 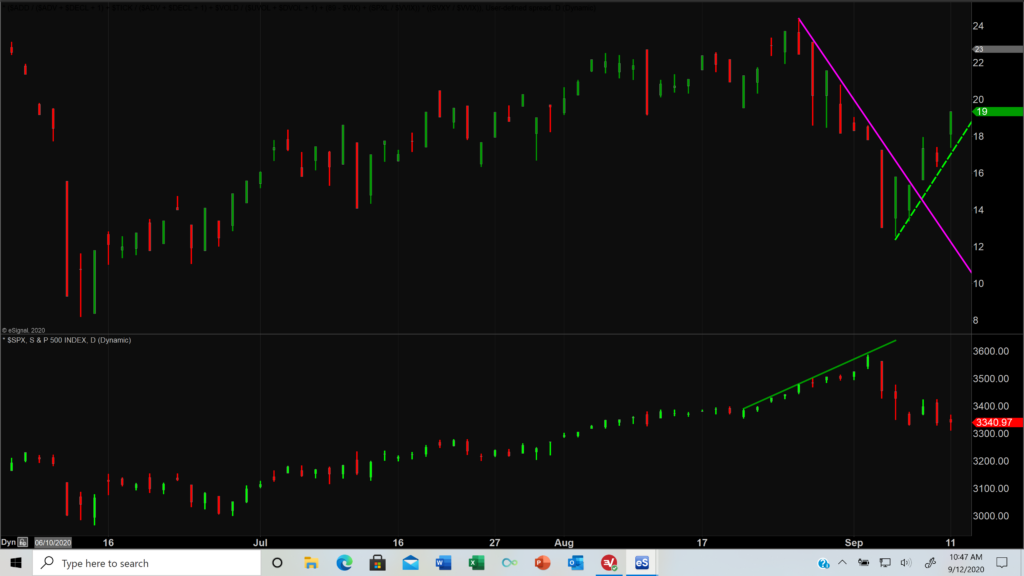 SAMMY and Cv ROLLINS have more modules in their formulas representing the impact of derivative risk management on total supply and demand than TATY, as their design ancestors were futures trading indicators, so much more tactical in nature after many iterations, and evolutions in development and testing. This kind of work never ends, because of the ongoing march of technology, and constant new risk management products being developed in the financial derivative universe. So let us take a look at what the stock market is willing to reveal about itself through the objective measurements of the ever changing balance supply and demand.

Both depictions of ROLLINS are telling the same story after being deadly accurate in warning us not to chase the stampeding “herd” into the September 3rd top. The news, though perhaps early, is good for the bulls. The down sloping bold magenta line on both charts was the “this may be a bull trap warning” prior to the top. The solid green line shows the dramatic price climb into the top. The dashed green line on the ROLLINS indicator is now showing the reverse of the warning at the top, as it is suggesting the selling is likely abating as the price is probing to go lower, and it may. This is classic positive divergence in an indicator family, yeah there are a number of versions of ROLLINS, but the Cv version appears a good candidate for survival over the months, possibly years to come, as it is very accurate for both futures trading, and for setting up tactical trades.

Given the developing positive divergences in the more muted weekly TATY strategic indicator, and the strongly rallying daily version of the Cv ROLLINS tactical indicator, investors should be alert to the possibility of a tactical buy signal developing this month. This may come as a surprise to those investors, which include seasonal analysis in their disciplines. Seasonal trends can be applied with a greater degree of success in the Ag futures markets, than historically in the financial markets. I use seasonal trends in the financial markets as background information only, and not as a trading methodology. This sets up an interesting situation, will negative seasonal trends prevail and the stock market come under increasing pressure, or will the tactical indicators prove to be as accurate at calling the next bottom, as they were of warning of the bull trap at the September 3rd top?

As a side note, a new tactical buy signal may also potentially set up a “Truman like surprise victory” for the current occupant of 1600 Pennsylvania Avenue in the electoral college. One of the best predictors of the presidential election is the level of the stock market going into the election. 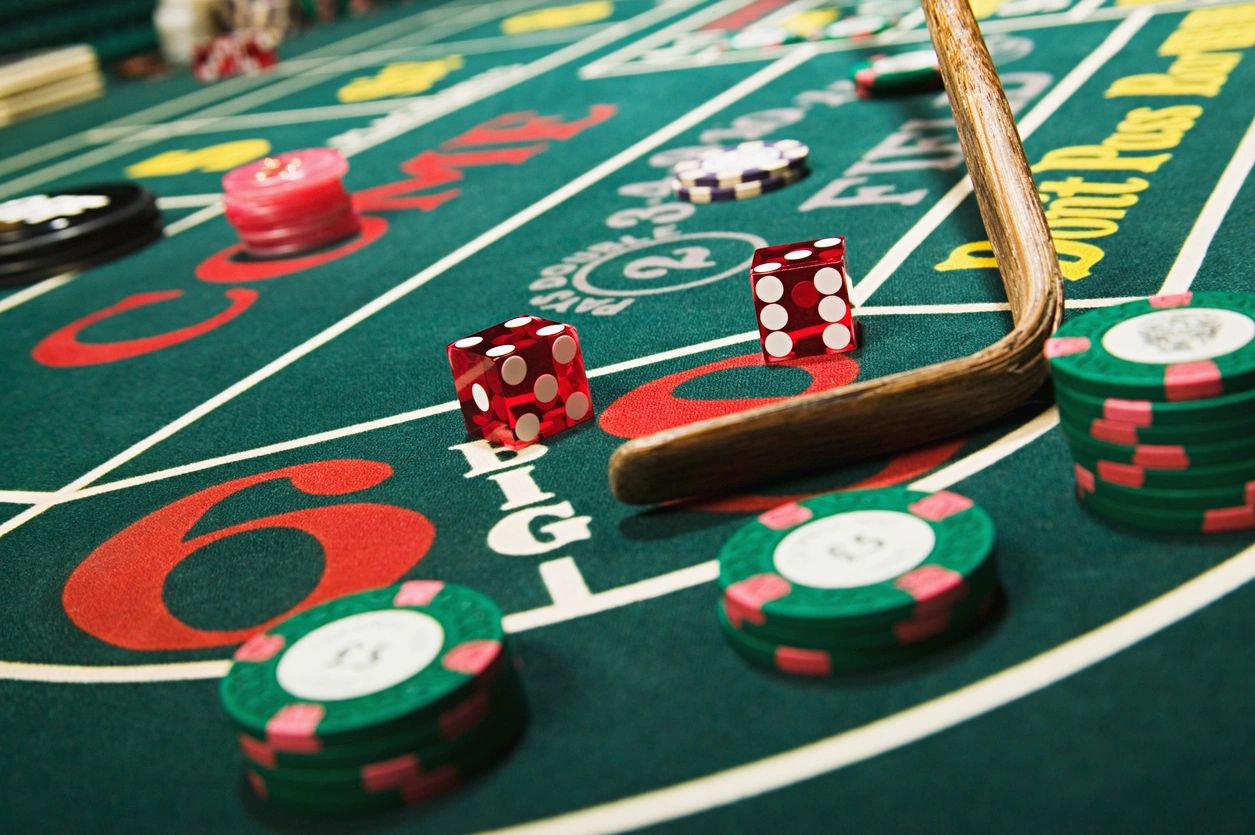 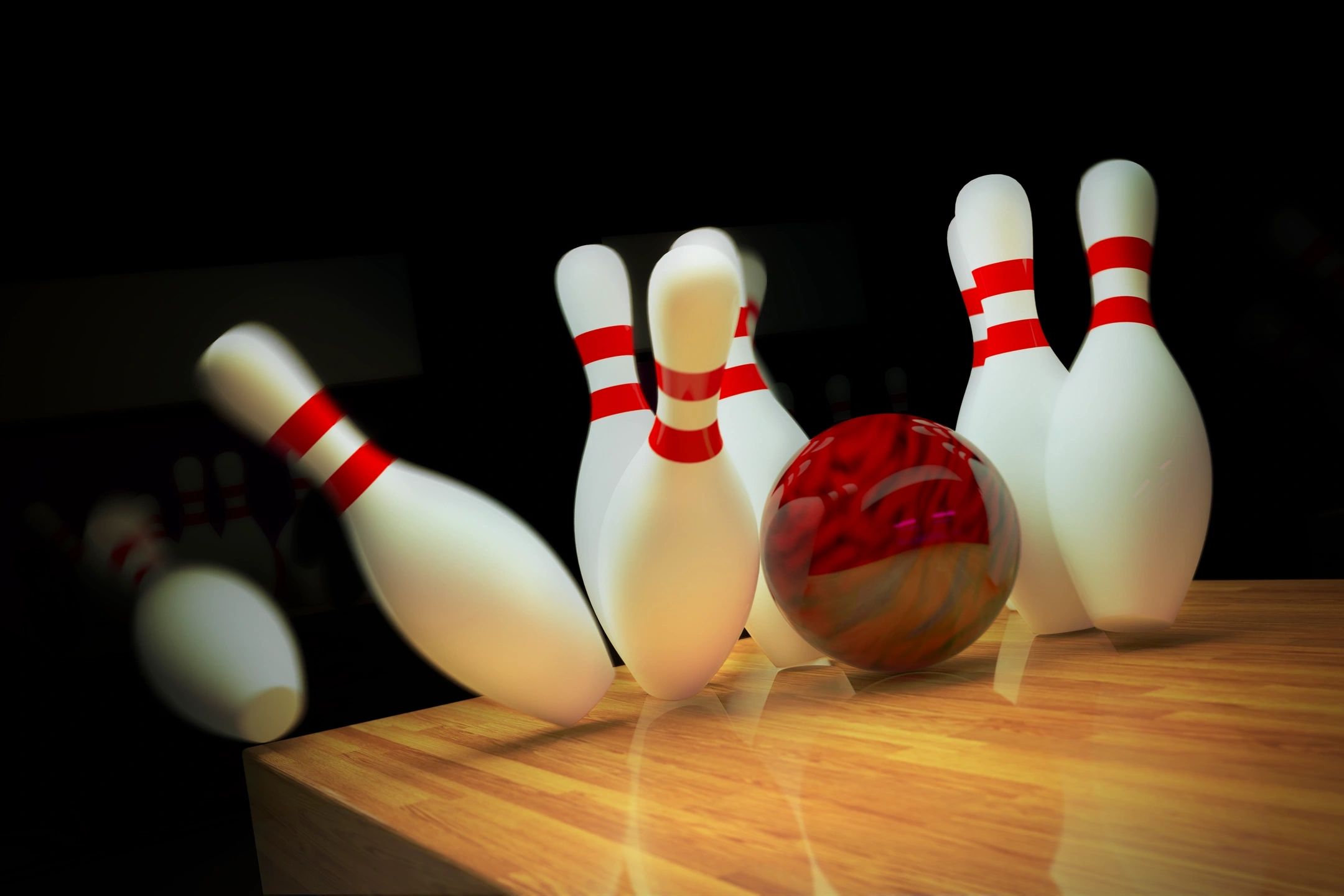 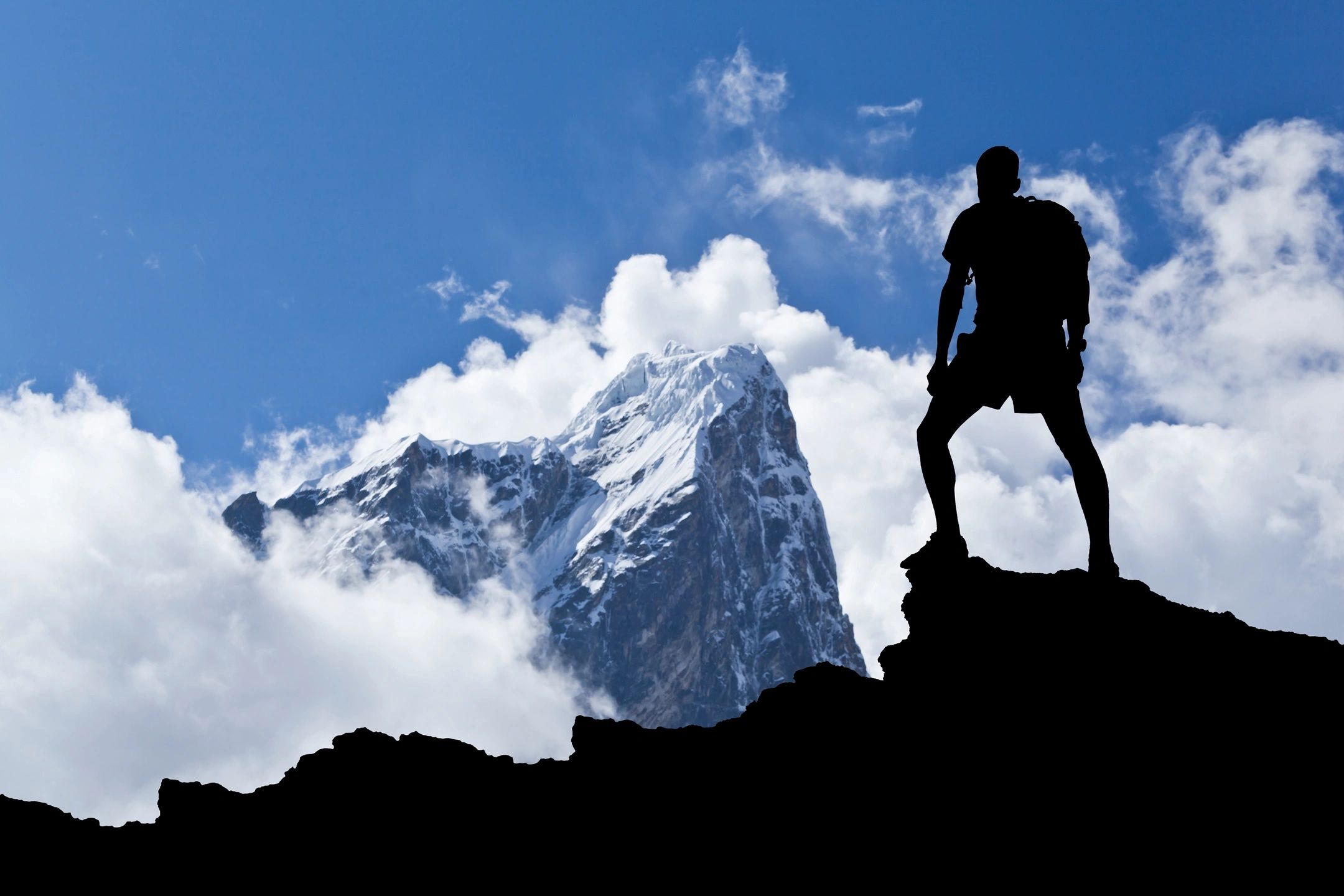